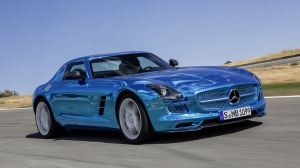 As we all know, the futuristic vision of motoring normally shows adventurous, spontaneous and all out happy people driving the electric equivalent of a Lada Niva, i.e. a Nissan Leaf, that silly little Peugeot thing and the G-Wizz . I personally think that is not the future for motoring enthusiasts. Well, if it were, then all motoring enthusiasts would say, “Bugger this!”, jump off a cliff and scream “YOLO!!!”

I think the company which has the correct idea for the future car is Fisker, especially with the Karma. They haven’t got it 100% right, but they’re onto something. The idea of having an electric motor as the main propulsion component is excellent. The way the Fisker works (if I got this right and I think I do) is with an electric motor at the rear axle, a bunch of batteries in the middle and a 2.0L turbo at the front. You plug it in your wall socket and it charges just like a phone. Easy. Or, you don’t even have to plug it in. You can just put petrol in it, but the engine doesn’t power the wheels. Instead, the engine charges the batteries, which in turn power the wheels. It is a brilliant system (apart from all the trouble Fisker has with the suppliers, fires and technical difficulties).

There is only one problem. When, not if, all the oil runs out, you’ll be stuck with this heavy lump of unused metal under the bonnet formerly called an ‘engine’. Then one day you can tell your grandchildren about this thing that used to power your car that also made this (sometimes) beautiful, intoxicating sound – not what granny drives now that makes this digital noise to keep her from falling asleep. I’ve gone completely off topic now…

Ummmm… oh yes, the ‘engine’. If you replace the ‘engine’ in the Fisker to, let’s say, a hydrogen fuel cell in the Honda FCX Clarity, then it can work as normal. People will go to a ‘HydroStation’ instead of a ‘Petrol Station’ and the world can continue as if nothing ever happened (well not really, but you get my point). I mean, hydrogen is the most abundant element in the universe. When we run out of hydrogen, then someone else can just copy and paste this blog and correct the vehicles and technologies of their time. Off topic again…

The best things about electric cars are the specs. All the power and all the torque are there from the second you ‘start’ the electric motor until the second you ‘turn it off’. It is awesome! I can only imagine driving something like the Mercedes-Benz SLS ElectricDrive around the Nürburgring. Or even a hyper-hybrid (just thought that word up) like the Porsche 918 Spyder, or the Ferrari with the stupid name, or the McLaren P1 (a company which should really revise their naming strategy).

Then you get to the bad things. The worst thing about them is that they will wipe out the manual gearbox. I can’t imagine a world without the manual car. I see it as a horrible, miserable place where gearshift hands and left legs are the most bored body parts the universe will ever see. Another thing is the range. And the sound. And the looks (Nissan Leaf). And the irritating fact that you bought an electric car!!!

Michael De Kock is (obviously) a car enthusiast, avid reader and movie lover who have the goal to know (at least) a little bit about (almost) everything.